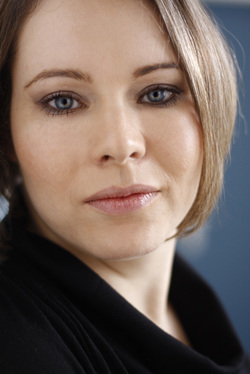 Austrian born musician Iris Ederer is a versatile singer who is at home in various styles of music from jazz to contemporary composition and free improvisation. She has always been fascinated by the shapes and sounds available either, inside or outside of songs, irrespective of idiom.

She was born in Weiz, Austria. Early studies included learning to play flute, recorder and piano, before beginning to study jazz singing with Annette Giesriegl. After studying at the Carinthian State Conservatorium in Klagenfurt with Caroline DeRooij, she continued to study at the University of Music and Performing Arts Graz with Laurie Antonioli and mainly under the tutorship of established jazz singer and pianist, Dena DeRose. To develop her voice further, she studied classical singing with Mary Frances Lubahn, Milan Opera singer, Gerd Kenda and Gabriel Lipus.

Early work in singing and performing with choirs, including “Resurexit“, the alumni choir of the Ursulines Graz, which won prizes at the International Schubert Competition in Vienna, has led to running various choirs herself. This includes children’s choirs with ages ranging from 6 to 14 as well as adult choirs such as the Gospel Group Puch for almost 10 years, which culminated in recording their current CD “Sometimes I feel…”. She became Director of the KUG Jazz Choir at the University of Music and Performing Arts Graz for three years. She also curated the “Choir Fire” festival in Weiz for a number of years, a meeting platform for various choir styles from around the world.

During her first years of University she started to work with her former teacher Annette Giesriegl in a unique free jazz vocal ensemble and performed with it at many venues around Europe and as part of the VNM Festival Graz 2007. She also helped form The European Free Ensemble with Uli Rennert on piano, David Gromon on flute and Dan Hasalik on guitar. At that time she also started performing with vibraphonist and composer Berndt Luef and the pianist Michael Kahr. Her work with Giesriegl started to grow even more in Spring 2009. This was also when she met the British composer, pianist and improvisor Veryan Weston, who proved key in her future musical development. They together with Sofija Knesevic, Franz Schmuck, Dorothea Jaburek, Siruan Küng, Anush Apoyan und Patrik Thurner formed the international A Cappella group `VOCIFEROUS`. Together they performed Veryan Weston’s composition `Tessellations II for 9 Singers` which was specially written for the jazz festival `Singers and Voices` at the Orpheum Graz. There was a subsequent UK tour, part of which was recorded at the BBC Pinewood Studios that was later released in spring 2011 for Martin Davidson’s EMANEM Records.

Moving to London in 2012 was a very important step to develop her musical activities and her work with Veryan Weston further. Out of that, one of her current projects ‘Make’ with Veryan Weston (veryanweston.weebly.com/make.html) developed. Her relationship with London also furthered her connection to the Gathering which was founded by Maggie Nichols more than twenty years ago and with whom Iris has performed since. Iris also worked with leading experimental vocalist Phil Minton as part of his Feral Choir at the Extraordinary Voices Festival at the Barbican Centre in London and was part of Minton’s Feral Singers at a festival held at the British Museum inspired by the Ancient Egyptian Book of the Dead, which was filmed by Helen Petts.

Since she has moved to London, Iris has participated in a number of festivals;  performing in duo with Oren Marshall at the Art of the Moment Festival, alongside an improvised dance performance, at As Alike As Trees in 2013, where she performed in duo with Marjolaine Charbin and  she performed John Eacott’s composition “Floodtide” – the sonification of the river Thames - at the Round House as part of the Accidental Festival 2013.
http://www.informal.org/floodtide.htm

In November 2012 she started to work with Jane Alden’s “The Vocal Constructivists“. They were invited by the multi-talented Kasia Sobucka to participate in Deconstruction Project’s Jazz and Experimental Music From Poland 2012 Festival at The Forge, London. There they performed music of Bogusław Schaeffer, Jan Duszynski (b. 1976), Kasia Glowicka and Andrzej Koszewski (b. 1922). She is part of a new recording made in November 2013 with the Vocal Constructivists recording compositions form composers such as Cardew, Applebaum, Redhead and Kuivilla.

The song based project, Tsk!, with baritone saxophonist David O’Connor is a very new and fresh take on music and fusing a mix of styles. They and their sparse instrumentation bring together songs selected from a range of sources - jazz, folk, classical, metal, traditional, blues - as well as improvisational elements from jazz and free improvised music.

She also keeps her projects in Austria alive: a trio with Dusan Simovic on bass and Reinhard Summerer on trombone, singing with the R.S. Big Band, with whom  she has recently recorded, performing with the Big Band Weiz as a soloist or with the vocal quartet she founded, The Styrian Vocal Jazz Quartet, performing tunes in the style of Manhatten Transfer and The New York Voices.

Also her first solo project “IRIS” will be released as a CD in the near future. It is a jazz-based recording featuring a rhythm section, trombone quartet and a flugelhorn, the latter an acknowledgement of the influence of the music of Kenny Wheeler’s upon Iris. The whole recording carries influences of experimental improvised music and English folk music with texts written by Iris Murdoch. In 2013 Iris’s performance of Veryan Weston’s “Make” alongside the composer won the PIARS competition recording award, which should lead to a recording being released on this label. www.fratto9.com/

photo above: David O'Connor
photo below: Una Stade
Powered by